What impact do you hope Love Free or Die will have? It is our hope that our film will do two things:

What led you to make your film about this particular person? From a storyteller’s point of view, I was interested in Gene as a character. To the 80 million people in Bishop Gene Robinson’s church, his is a household name. For some, he is a saint – the one we’ve been waiting for – the person who embodies the fact that the Church and God can affirm LGBT people. But for many of those millions, he is the face of Satan. So many people would like to see Bishop Robinson fall. So many have worked to make that happen. One reason I wanted to make Love Free or Die was to study how anybody can bear the weight of that degree of scrutiny, of pressure, day in and day out over all these years. But I am also aware that we are teetering at a tipping point in history; a time that will have a clear before-and-after mark that may well fall in the near future. When I was born, the notion that, in my lifetime, I could be legally wedded to my husband in my church and state and adopt my two children in Arizona and Pennsylvania, two traditionally conservative states, was ridiculous. Today, it is my reality. To document this historic shift is the assignment of a lifetime, as a filmmaker and as a gay dad.

What were some of the challenges you faced in making the film? Two challenges that come to mind in making Love Free or Die are in a sense two sides of one coin. It was painful to interview, off the record and even on, clergy person after clergyperson who confessed to me that they were gay or lesbian but were unable or unwilling to come out for fear of the repercussions. Victims of the system, they spoke of their desperation for liberation, even as they were unable to join the movement to win it. Their anguish was excruciating to behold, particularly as someone who had fled that closet myself. It was painful in a different way to interview warm, friendly clergy people who were outspoken opponents of lesbian, gay, bisexual and transgender equality. They had to have known or intuited that I was gay. It was clear that they understand themselves to be operating from a place of love for me and people like me, even as they articulated their beliefs that homosexuality was evil and that my love of my husband and parenting of my children was inferior and unacceptable to God. It is not easy in an interview to hold the gaze of a person as he proclaims the ideology upon which my oppression is based and built.

How did you gain Bishop Robinson’s trust and persuade others in the film to open up? Religion is my family business. My father, grandfather, and great-grandfather were all pastors and I, too, have a graduate degree in theology. As a result, I speak a common language with the people in the film, wherever they stand on this issue. I think the fact that I do not see religion as the problem, but instead the way it is used all too often to oppress rather than liberate, resonated with many of the bishops. I had also worked with Bishop Robinson and many of the other subjects previously, and so was considered an insider, relative to most of the journalists who were knocking on their doors.

What would you have liked to include in your film that didn’t make the cut? There was a scene in a centuries-old church in rural England in which Bishop Robinson spoke to a packed house so compellingly. After the conversation, a large older man approached him and began to cry, saying he had left the church decades ago and that he never imagined he might return; that this was the first time back since he was exiled for being gay. Another woman, old, withered, with crystal blue eyes, stood and asked Bishop Robinson what he made of the fact that the bible says that gay people should be stoned to death. Bishop Robinson asked her if she thought he and his partner should be killed. She said, “It is not what I am saying, it is what God commands.” After the service, she delightedly unpacked her perspective on the issue, leaving the viewer with the stark image of this nice old lady spouting language of hate as if it is God’s will and the stark truth that religion continues to provide the justification to many for violence against LGBT people. 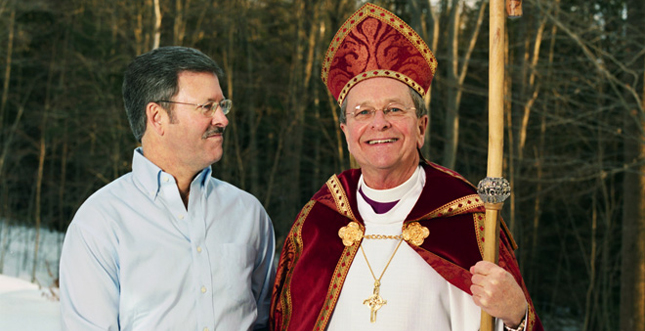 Tell us about a scene in the film that especially moved or resonated with you. I have two favorite scenes. The scene on Gay Pride Day in New York City may be my favorite scene in any of my films. Intercutting Bishop Robinson’s sermon that day, the best articulation I have ever heard of the culpability of organized religion in regard to LGBT oppression and call to people of faith to stand for equality for all, and the parade in all its glory as it headed toward the church where he preached, makes me cry every time I watch it. My other favorite scene is one in which Bishop Tom Shaw of Massachusetts, who comes out in the film, gets in a water fight with two gay dads and their four adopted boys, one of whom is Bishop Shaw’s godchild. The parents tell the story of their church’s refusal to baptize their children because their parents are gay. Bishop Shaw, as the story ends, stands, gets a child’s beach toy bucket, fills it with water, and dumps it on his godchild’s head. A drenching water fight ensues in which the dads, the boys and the bishop get soaked, laughing, joyful – the church’s previous wrong undone by the Bishop’s brave love and commitment to the family and to what he believes to be right.

What has the audience response been so far? Have Gene and the other interviewees seen the film, and if so, what did they think? Audience response has been overwhelming. We have screened in more than 250 communities, largely by request – churches, communities centers, campuses saying that The people featured most prominently in the film have seen and embraced it. It was shown at the once-every-three-years General Convention of the Episcopal Church this summer to hundreds who gathered. Bishops Robinson and Shaw invited me to the clergy conferences of their dioceses and I had powerful conversation with those who work for and with the bishops – hundreds of local pastors – about the ramifications of having gay bishops and how this issue is critical in the lives of their congregations. Not everyone is on the same page on this issue at these gatherings, but the film has served well to create a space where people can stand for LGBT equality without demonizing or dehumanizing those who are not there yet. Yes. Bishop Gene Robinson decided it was time to move on from the Diocese of New Hampshire in order to stand for global justice as a Senior Fellow at the Center for American Progress and develop a center at St. Thomas’s Episcopal Church in DC to promote civil discourse and conflict resolution around the issues that divide us in the public square. Interestingly, Archbishop Rowan Williams also decide it was time to move on from helming the Anglican Communion as its titular head. He will step down from his post at the end of 2013. The Episcopal Church gathered again in 2012 for the first time since its 2009 General Convention depicted in the film. It took the next set of bold strides toward the full inclusion of LGBT people in the life of the church, among them, the approval of a liturgy for the blessing of same-gender marriages.

The independent film business is tough. What keeps you motivated? There is nothing quite as exquisite as beholding the beauty of real life and then capturing it, even heightening it, in film. Because none of it is fiction, though certainly there is much art and eye involved, it all feels like revelation – the scene beheld in real life and then in the edit room and then on the screen. That said, this work is really hard. It is labor intensive and you do not do it for the money. I have directed five feature documentary films. At the end of each, I am convinced I will never make another. Yet each time I have come to that conclusion, a new story has grabbed me by the neck and flung me down a new road. Convinced that Love Free or Die is my final word in documentary form, I also find myself peering around each corner to see what story is headed my way, looking to claim me for the years ahead.

Watch Bishop Robinson on Persevering in the Face of Hatred on PBS. See more from Independent Lens.

Any updates since you finished the film?Why did you choose to present your film on public television? My first film, Family Name, premiered on POV in 1998. I have had great experiences with other broadcast partners, but it is to PBS that I most regularly turn for documentaries that will change my life and I am not alone. I am thrilled that people across the country can — at no cost — connect with this critical story on a station they know and trust.

What didn’t you get done when you were making your film? I didn’t sleep much. The 3am hour was where I met all my fears on a daily basis. As a father of two kids with a stay-at-home husband, the family relied on me for food on the table and health benefits. I have a magnificent day job that allowed me to go make this film when I had to, but this work is not easy. I am unspeakably grateful to my family and to my colleagues for providing the support and space to follow my star.

What are your three favorite films? Today, off the top of my head, I will say that my three favorite fiction films are: Shoot the Piano Player, directed by Francois Truffaut The Piano, directed by Jane Campion Days of Heaven, directed by Terence Mallick The film that made me become a documentary filmmaker is Time Indefinite by Ross McElwee.

What advice do you have for aspiring filmmakers? Pick a topic that your life depends on understanding better. When I made my first film, I presumed it would never get completed and once it did, it wouldn’t be any good, so I picked a topic that I felt I had to explore in order to come to life, that would transport and transform my life and understanding, whether the film was good or bad. With stamina, a good idea, and the willingness to simultaneously listen to the counsel and criticism of others and hold true to your vision, you can make a great film. I promise.

What sustains and literally fuels you when you’re making an independent film? Wine. Coffee. Chocolate. Repeat.