Musa Syeed is one of the hottest up and coming filmmaking talents in the U.S. His work includes documentaries such as A Son's Sacrifice, Bronx Princess, and a narrative feature, Valley of Saints — which is currently on the festival circuit. He has also been experimenting with new, interactive forms of storytelling, and we asked him to write about his experiences for BTB. 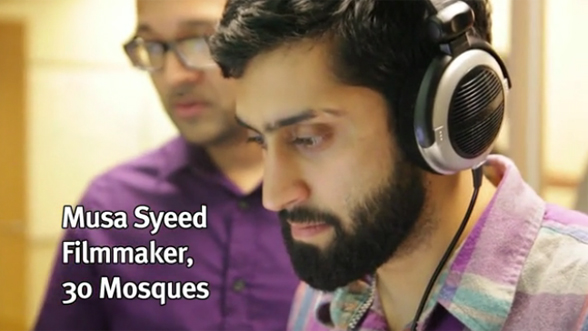 For most of my life, I’ve been something of a technophobe. Maybe it was that I watched The Terminator at too young an age or perhaps it was my father’s insistence on the superiority of the microwave, but either way, an epic struggle with artificial intelligence and subsequent robot armageddon has long seemed to me not only possible but imminent. And I felt that as a filmmaker, I had reason to fear technological advancements in the field. New media/interactive/transmedia was making a medium I revered as a child seemingly obsolete, banishing motion pictures from the majestic big screen to pathetic, paltry iPhones.

Despite this fear and hatred, I became pretty engrossed in my Facebook and Twitter feeds. Whether I liked it or not, these new media platforms were built to be engaging, and I was engaged. And here is where I realized what new media tools offered me as a filmmaker: they could fill my outreach gap. Traditional outreach for a film usually means community screenings and discussions. While those screenings were a good way to see the film’s impact on the ground, they’re not always creatively fulfilling or particularly sustainable. By the time I got to the outreach stage of a film, I’d usually rather just work on my next film. This was disappointing, since I got into filmmaking for its potential for social change. So when I had the opportunity to participate in BAVC’s Producers Institute for New Media Technologies, an institute to help filmmakers create new media outreach projects around their social issue films, I thought I’d give it a try.

I went to the institute with my first feature film, Valley of Saints, a gentle romance set against the backdrop of environmental devastation in war-torn Kashmir. While the film can raise awareness internationally about the problems facing Kashmir’s environment, I realized it can do little on its own to make change where it’s needed. Considering we had a specific problem (environmental devastation) and an aware population (Kashmiri youth) who either didn’t know what to do or felt they couldn’t do anything about it, we knew the solution lay in bridging that gap. With my producer Nicholas Bruckman and designers Noah Keating and Tony Walsh, we designed the social game Kashmir is Beautiful, using Facebook as a platform.

Facebook is hugely popular in Kashmir, and many youth have turned to the social network when physical meetings and mobility are often interrupted by strikes and curfews. While there is some initial virtual gameplay, the game’s real-life missions are what make it unique. Players are given challenges to go away from their computers and document nature or their own green actions with their phones. They then come back to the game to share their photos. They only progress in the game once their photos have been viewed and verified by other users. Ultimately, the game is meant to foster a sense of personal responsibility and a community of environmental stewardship. Shortly after the institute, I started working on a documentary about the 30 Mosques project with co-director Omar Mullick.

My friends Aman Ali and Bassam Tariq roadtripped to 30 mosques in 30 states in 30 days, blogging all the way. The unique window they created into the community gained a lot of attention, and we literally had a backseat view of their journey. After the road trip, we were invited to the ITVS/Mozilla Living Docs Hackathon. An intense two-day marathon, the Hackathon paired filmmakers with coders to create dynamic, interactive, immersive online documentary experiences using Mozilla’s Popcorn.js framework. Initially we thought to integrate the film and the blog online, but we realized that we would be doing a disservice to the film and the blog. They weren’t made to go together, and doing so would be clunky and unnatural.

Instead, we looked at the project’s strengths and needs to decide how to best use the technology. In terms of strengths, the 30 Mosques project has an incredibly engaged community of readers and has inspired many spinoffs throughout the world. In terms of needs, readers want a greater diversity of perspectives on the community aside from 30 Mosque’s two South Asian male creators — in particular there is a demand for the voices of Muslim women. So, we decided to create a crowdsourced, dynamic storytelling platform that would put the authorship in the hands of the community for the next stage of the 30 Mosques project.

We were inspired by the MadLibs game, where one player asks another for specific words to fill in the blanks of a pre-scripted story, collaboratively creating a narrative with unexpected results. In this case, we will provide a challenge or prompt to our users, for example “What is it like the last hour before you break fast in Ramadan?” Users then create videos of their answers to the challenge, and when uploading to the site, they will be asked to tag the video with a specific set of metadata (keywords, time of day, location, etc). The metadata tags of their video will then fill in the blanks of a timeline, which includes our scripted voiceover to tie the user content into a cohesive narrative around the challenge. The timelines will evolve as new content became available, and users can also choose different timeline views — a timeline of the most shared videos, a geographically-specific timeline, etc.

As filmmakers and bloggers, handing authorship over to the audience isn’t actually scary. It’s actually quite liberating and exciting. So while I’m still just getting my feet wet in the interactive realm, I’m beginning to see it as an essential part of making a traditional film. As much as I embrace these nonlinear forms of storytelling, I take comfort in knowing the story of storytelling is also not linear. Traditional cinema will always be close to my heart. Not even the robots can take that from me. Take a look at Musa Syeed's slides from his presentation at the SFIAAF: