ITVS’s Claire Aguilar participated as a film expert at the American Film Showcase in Monterrey, Mexico in August and conducted a two-day workshop at the Escuela Adolfo Prieto.

The American Film Showcase is an international cultural diplomacy initiative, a partnership between the U.S. Department of State’s Bureau of Educational and Cultural Affairs and the University of Southern California’s School of Cinematic Arts (SCA).  The purpose of the Showcase is to bring people together worldwide through film, showcasing award-winning American films to international audiences through events worldwide.  Filmmakers and film experts discuss the films and conduct workshops to international audiences of festival participants, students, and the local communities. 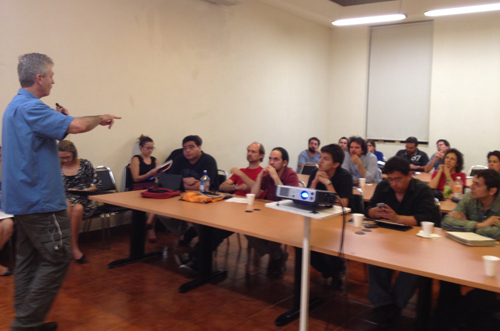 Filmmaker Steve James during his workshop.

I had the pleasure of participating in the showcase as an expert and conducted two workshops for filmmakers and film students in Monterrey, Mexico, with an invitation from the US Consulate in Monterrey.  I was accompanied by filmmaker Steve James, who screened his latest film The Interrupters – about a group of “violence interrupters” in Chicago who try to protect their community from the violence they once employed.  Steve screened The Interrupters as part of the Monterrey International Film Festival, and to various community groups, including at-risk youth, violence “interrupters” in Mexico, and social aid workers.

Monterrey is Mexico’s third largest city, located in the Northeast foothills of the Sierra Madre mountain range.  It is a large and sprawling city that is Mexico’s 2nd richest, a commercial center filled with many multi-national corporations and is also rich in history and culture.  It also is the locus of many ongoing drug cartel battles – the Mexican drug war has touched many places in Mexico but has particularly affected Monterrey.  It was interesting to see The Interrupters - an American film about violence, drugs, and economic struggles - with many parallels to the violence around gangs and drugs in Mexico.  But it was also interesting to see how audiences in Mexico saw the similarities of universal conflict in the world and were fascinated in how these conflicts could be resolved at home. 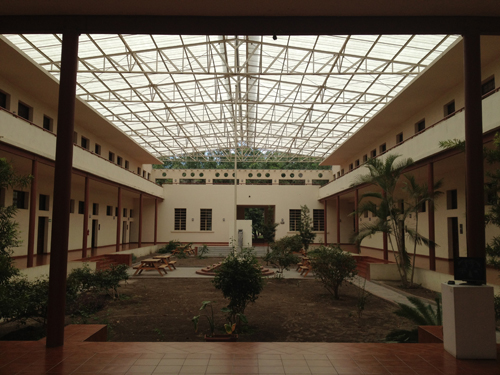 The Escuela Adolfo Prieto in Monterrey

The two-day workshop at the Escuela Adolfo Prieto (Taller de Experimentacion Plastica), began with a morning session for local university students and an evening master-class with local filmmakers, each comprised of about 20 participants, ages ranging from 18 to 25 for the students and 30 to 50 year-olds for the filmmakers. Both groups were given an in-depth analysis of financing methods for documentary films, including accessing public funds, crowd-source funding, and distribution mechanisms. I used many examples of films funded and presented by ITVS, including Detropia, The House I Live In, Reportero, and Plastic Bag, and the students and filmmakers also shared their own projects in development and production. On the last day of the workshop, Steve James gave a presentation of his own work and procedure by showcasing the production process of his films, including Hoop Dreams, Stevie, and  The Interrupters.

Since James’ films are usually situational or longitudinal observations of daily life, the question is establishing access and trust of the characters, especially those in particularly challenging, violent, or emotional states.  The students and filmmakers were enthusiastic and had many questions about the process of production.  A big challenge for independent filmmakers in Mexico is the lack of distribution venues on television or theaters and access to local distributors for their work, whether they are features, documentaries, shorts, or animation.