Women and Girls Lead and CARE are partnering for a special live online screening of the PBS documentary Pray the Devil Back to Hell (part of the recent Women War & Peace series), followed by a live panel discussion with Executive Producer Abigail Disney, PBS CEO Paula Kerger, and CARE President Helene Gayle. The event will take place on the eve of International Women’s Day from Washington, D.C. March 7 at 7:30pm ET on CARE’s website. 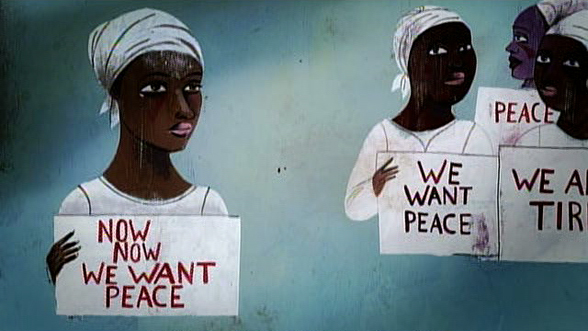 Pray the Devil Back to Hell is the astonishing story of the Liberian women – including Nobel Peace Prize winner Leymah Gbowee – who took on the warlords and regime of dictator Charles Taylor in the midst of a brutal civil war, and won a once unimaginable peace for their shattered country in 2003.

As the rebel noose tightened around the capital city of Monrovia, thousands of women – ordinary mothers, grandmothers, aunts and daughters, both Christian and Muslim – formed a thin but unshakeable line between the opposing forces. Armed only with white T-shirts and the courage of their convictions, they literally faced down the killers who had turned Liberia into hell on earth. In one memorable scene, the women barricaded the site of stalled peace talks in Ghana and refused to move until a deal was done. Their demonstrations culminated in Taylor’s exile and the rise of Africa’s first female head of state, Ellen Johnson Sirleaf. Inspiring and uplifting, Pray the Devil Back to Hell is a compelling example of how grassroots activism can alter the history of nations. Watch the trailer: