ITVS’s Kate Sullivan Green sits down with Marco Ricci to talk about the documentary The Reconstruction of Asa Carter. 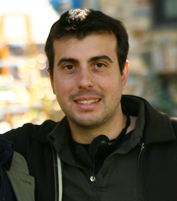 Hundreds of thousands of readers have loved The Education of Little Tree, Forrest Carter's memoir of his life as a Cherokee orphan. It turns out, however, that the book was written by an infamous white supremacist, Ace Carter, who penned George Wallace’s “segregation now, segregation tomorrow, segregation forever” speech (among others). Directed and produced by Marco Ricci, Douglas Newman, and Laura Browder, The Reconstruction of Asa Carter takes viewers on a journey through Asa Carter's multiple lives to explore questions of race and identity in America. The documentary will air on public television starting in April. Check local listings.

When did you first learn about the secret lives of Asa/Ace/Forrest Carter?  In the early 1990s, Douglas was a student at college (where he met producer Laura Browder) and was assigned the book The Education of Little Tree.  He’s reading it and his father is telling him the book is untrue while his professor is saying “No, no, no. That’s a rumor.”  This is just as it was breaking in the national press.  Douglas actually did a short documentary about it while in school too, then left it alone for 10 or 15 years. At that point we were working together on another project and he brought up the story. I thought it was incredible from both a film perspective and historical perspective.

What drew you to Asa Carter’s story exactly? It’s a two-fold thing – there’s the historical/sociological bent about how people can go from one ethnicity to another, and why society is so easily duped. But it’s also just a great story.  It’s about myths and legends; is it a con or isn’t it; and all about lies and deception. Is he going to get caught? Isn’t he? There is something inherently cinematic about that.

You chose to use reenactments to tell his story, along with your archival footage and spinal interviews. Reenactments are really hard to pull off (and often really cheesy), but you guys did such a great job integrating yours. What was your process there? Carter’s life is full of personas, embellishments, characteristics created for an audience. There was “Ace” the Klansman and “Forrest” the Cherokee, but we felt there was a third persona that no one ever quite got to know.  Perhaps this was the true Asa, and we wanted to give that character some life on screen. Thus the desire to do re-enactments. They were to represent this third persona that didn’t really exist in archival footage. I come from a narrative background so we made a choice to shoot it in a very cinematic way. We approached it like we were making a film within the film. We wanted to hold on the re-enactor’s face, so that we could get into his head.

We didn’t try to hide the fact that there was a re-enactor but we embraced it. One thing we did discover was that there was a sweet spot in terms of composition. Medium shots were no good. As were shots where the character was positioned squarely in the middle of the shot. There needed to be some mystery. The audience needed to fill in some of the blanks.  One of my favorites is a shot at the typewriter in the foreground and Asa in the background on the phone. I think that got to the point of what we were trying to do. After a screening, someone said, “I sort of understand where Asa was coming from.”  In a sense, that meant the reenactments did a good job.  It would be so hard to relate to him on a personal level without them. Additionally, the film is about the power of the media. We made the choice to shoot re-enactors watching TV and placed archival footage within that TV. The point was to demonstrate how Carter’s message was so successful at entering into people lives. 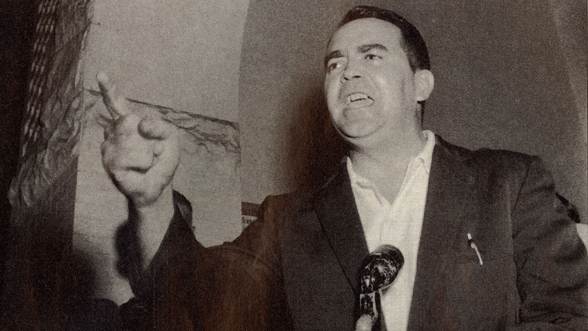 What’s the general reaction other people have had at a screening? It’s very interesting.  No one talks about the filmmaking.  They always want to talk about Asa since there are so many open-ended questions about his life.  People will add their two-cents or guess at what they think really happened.  Or they know something about the story and want to share more information. The film leaves many questions unanswered. We struggled with that in the beginning, and then embraced it.  In fact we realized that’s the point – can you ever really know someone? Identity is not in Carter but in the eye of the beholder. In a sense he comes from the particularly American idea that you can be anything you want to be. I think the fact that people are passionately arguing over what really happened makes the film successful.

What’s one lesson you learned while making of this film? One is to try and do a doc about a living person. Really though, something I found interesting is more philosophical. I interviewed someone and asked, “How can Ace Carter have written what Forrest Carter wrote?”  My interviewee responded,  “Asa didn’t change. That’s just who he was the whole time.” At first I dismissed it. Then I started thinking, you know, maybe that is the case. Just because someone is a Klansman, why can’t he also have in himself some huge capacity for loving his neighbor or the land?

Most people think those are mutually exclusive traits, but maybe they’re not. Just because you write some stuff that incites people to violence, that doesn’t mean you’re not capable having a moment appreciating the tree in the backyard. We want to separate them so much that we assume they are incompatible, but at the end you see that someone can be both.  So maybe that guy was right — that’s who Asa was.  It was me who couldn’t comprehend that he could be both of those things. Along those lines, it’s interesting that the message in The Education of Little Tree - anti government, anti authority, individual freedom — made sense to both white southerners in the '60s and left-wing, anti-Vietnam protesters in the '70s. I also learned that if you’re filling up the production van at 4am and the gas pump isn’t fitting, don’t jam it in. It’s diesel and then your car smokes a lot.

To close, please share one piece of filmmaking advice you’ve received along the way that’s been particularly memorable and useful. There are tons, but what’s coming up now is something an editor once said. He was at this point in the middle of a film, and the director started talking about some tiny minuscule thing about continuity or something. To which the editor replied, “If that’s what your audience is thinking about at this point in the film, then you have much bigger problems.”