Independent Lens and the Pulitzer Prize-winning Louisville Courier Journal (LCJ) raised awareness of Kentucky's Persistent Felony Offender (PFO) through a collaboration between independent filmmakers and journalists. The investigative series drew a link between the law's enhanced sentencing terms to the state’s high and growing prison population. People, families, and communities impacted by the law shared their insights on solutions for reform.

Kentuckians who engaged with the multimedia content shared their perspectives on the coverage and the PFO law via the Independent Lens interactive feedback platform, DocSCALE.

Almost half of them indicated that they learned about the existence of the law. And, even among those who were previously aware of the law, the in-depth coverage provided new insights. Fifty-nine percent of these viewers indicated that, while they knew the law existed, the coverage shined light on how the law impacts Kentuckians and on efforts to reform it.

The partnership provided in-depth coverage of the PFO laws through different outlets across the LCJ network.

Thousands of Kentuckians read the articles and watched the short films. Persistent: A Challenge to Kentucky’s PFO Law , which follows Marcus Jackson as he fights for change to the law and confronts the intergenerational trauma inflicted on his family by the decades-old statute, alone has received nearly 10,000 digital views from LCJ readers, Independent Lens followers, and event participants. Similarly, the related LCJ article was viewed more than 7,600 times online. The print edition reached about another 150,000 potential readers of the series. 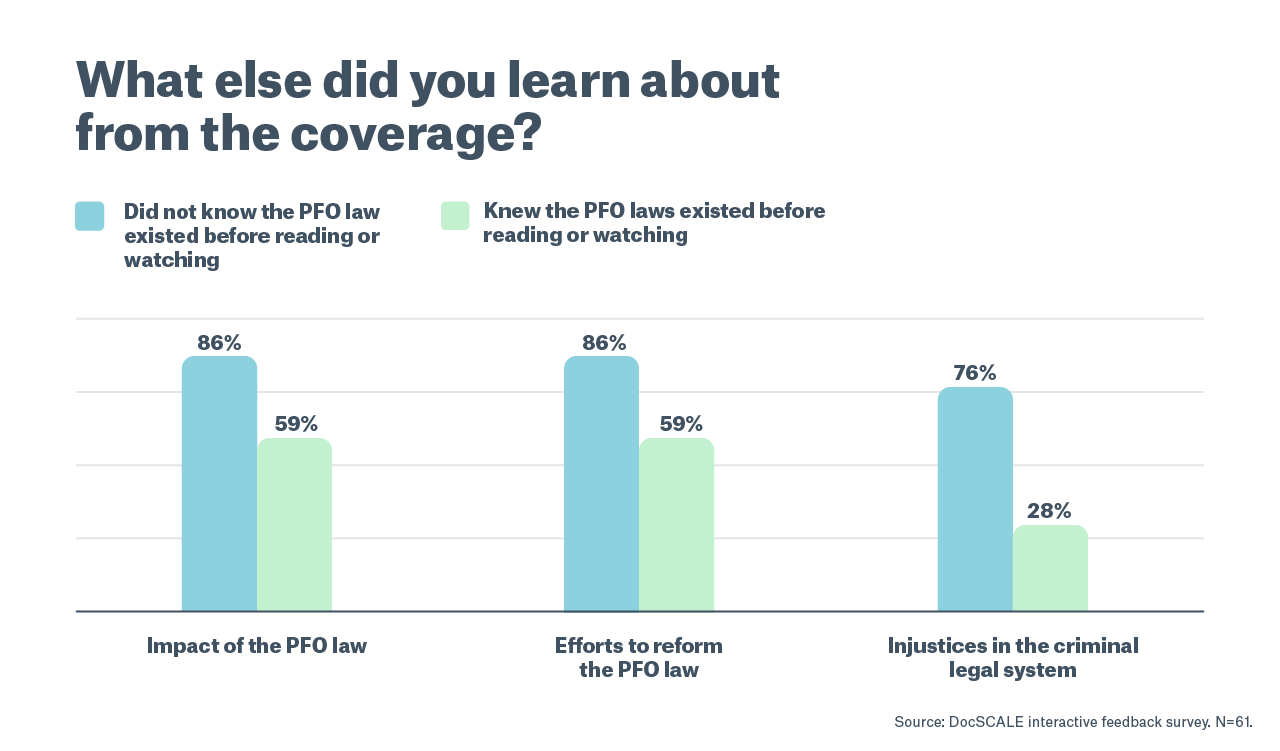 In particular, Kentuckians noted concern about the impact the law has had on families and communities, and largely agreed that they would discuss the law’s outsized impact with others. As a woman from Mount Vernon, Kentucky, put it: “It is important to bring these conversations to light! Communities and families have been devastated by these out-of-date laws.”

While a few Kentuckians were hesitant about changing sentencing laws for felony convictions, a larger group wanted action. Kentuckians from across the state indicated that they planned to raise the issue of sentencing reform directly with their legislators.

Looking beyond sentencing reform, many individuals called for more community-based prevention to avoid incarceration or re-incarceration altogether. In particular, Kentuckians drew a connection between the lack of behavioral health resources in Kentucky and rising incarceration rates. As summarized by one Louisville resident: “The question is why are offenders persistently re-offending? Mental health issues … lack of substance abuse and long-term recovery programming all play a part. Giving someone longer prison terms will not fix any of these issues.”

Many participants plan to continue the conversations started during community events and on DocSCALE. Seventy percent of respondents indicated that what they learned was “extremely” relevant to their community and 64 percent were “extremely” likely to discuss the law further. 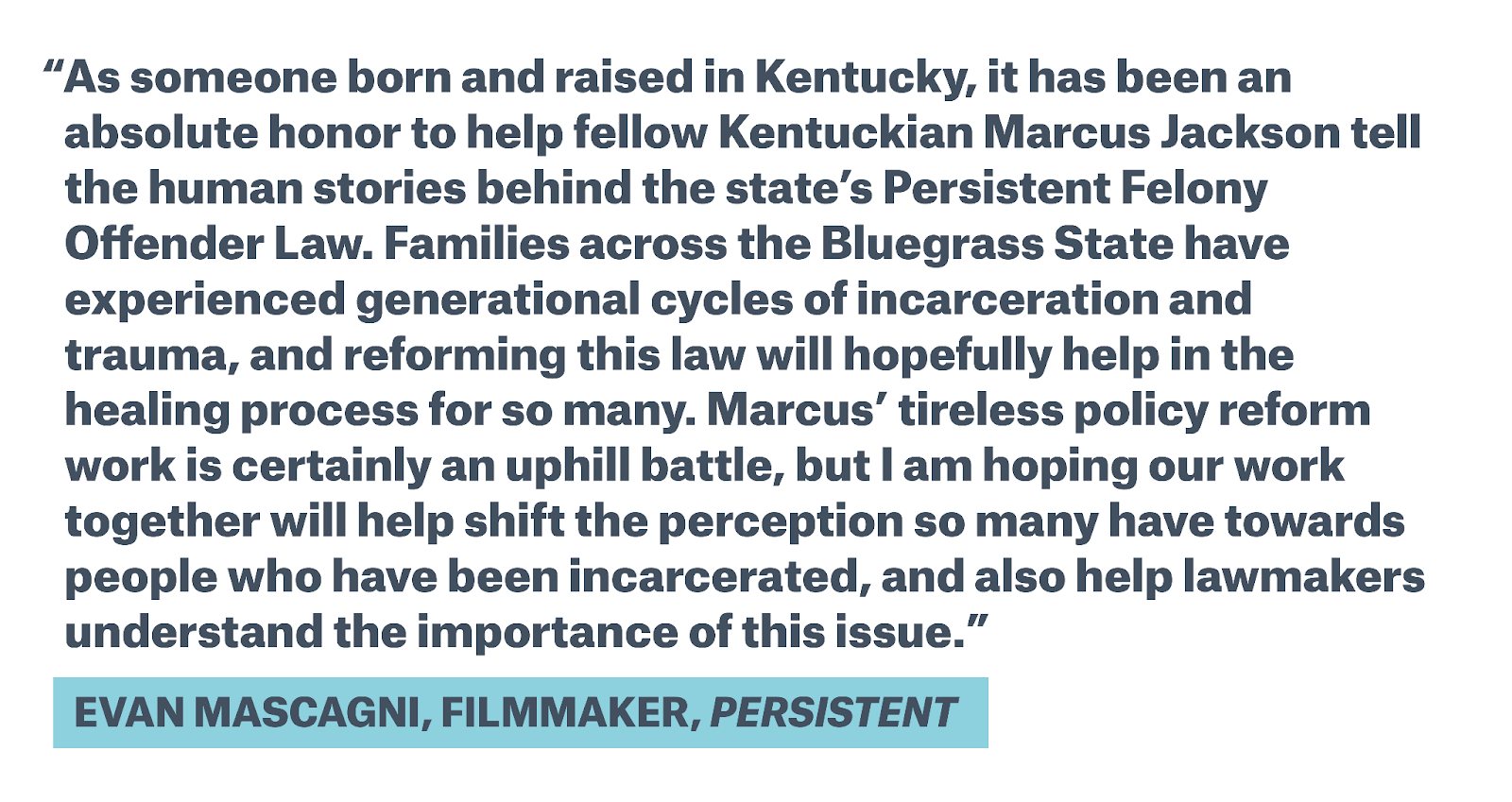 The experiences of these audiences reflect similar results from the last two years and suggest the impact of Stories of Justice will continue to grow over the next 3+ years, as Independent Lens forges new collaborative journalism partnerships that bring relevant, informative, and impactful news to local communities across the country. To learn more, check out our Stories for Justice Impact Overview that highlights our work during the Development Phase and Year 1 of this multiyear initiative. 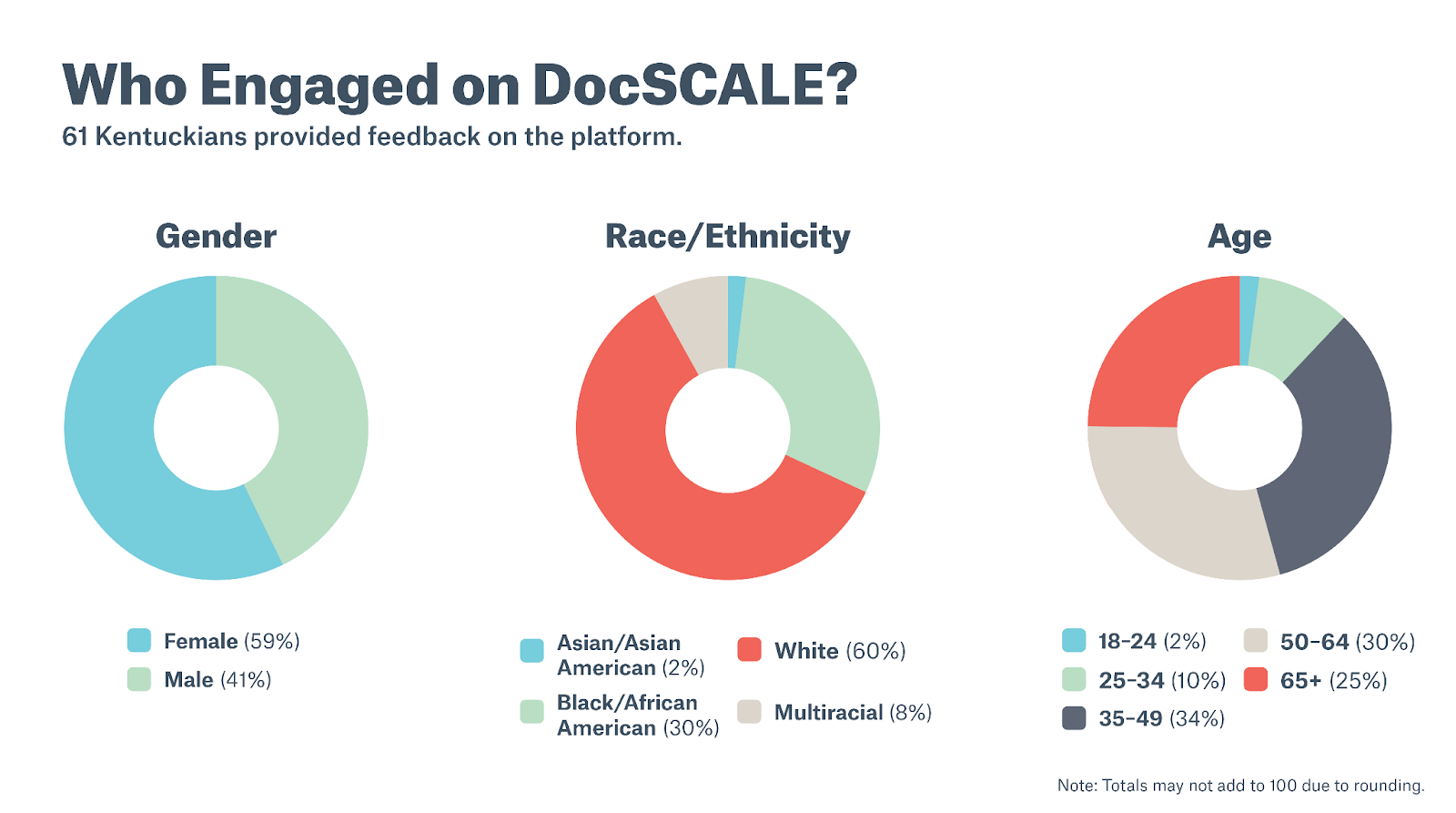 Stories for Justice is made possible with the generous support of the Corporation for Public Broadcasting, Ford Foundation, John D. and Catherine T. MacArthur Foundation, Wyncote Foundation, and Park Foundation.