Summer Pasture and the Why Poverty? series were among the programs honored on Monday at the George Foster Peabody Awards in New York City. Administered by the University of Georgia’s Grady College of Journalism and Mass Communication, the Peabody is one of the most prestigious honors in electronic media. 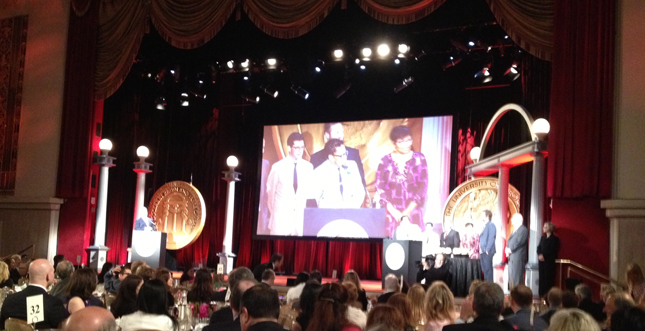 The 72nd Annual Peabody Award Luncheon on Monday, May 20, 2013. Courtesy of Lois Vossen.

Summer Pasture and two of the documentaries from the Why Poverty? series, ITVS-funded Park Avenue and Solar Mamas, aired on Independent Lens in 2012, representing the only PBS programming to be recognized at this year’s ceremony. Independent Lens Senior Series Producer Lois Vossen attended the luncheon and accepted the Summer Pasture award on behalf of the filmmakers, who were unable to attend: "It was an honor to attend the Peabody Awards to accept a Peabody on behalf of Lynn True, Nelson Walker, and Tsering Perlo for their beautiful film Summer Pasture. Independent Lens was also awarded a Peabody for Park Avenue: Money, Power & the American Dream and Solar Mamas, which broadcast as part of the Why Poverty? series. Winning PBS's two Peabody Awards this year is further indication of the extraordinary and extraordinarily important work independent filmmakers do. Their unyielding passion and commitment to journalism makes them a vital part of public television. We need their voices now more than ever. It also didn't hurt that Judd Apatow told me today how much he loves Independent Lens and that it is one of his favorite series!"

Congratulations to the filmmakers on this incredible achievement and to our colleagues at PBS and WGBH WORLD for broadcasting the series.