In Motherland Aghanistan, which aired on Global Voices in May, Afghan American filmmaker Sedika Mojadidi journeys to the heart of this medical tragedy by following her father’s (Dr. Qudrat Mojadidi) return to Afghanistan to battle one of the highest maternal mortality rates in the world. Sedika Mojadidi provided BTB an update on her father's work, both in Afghanistan and the United States, and shares some insight on her own recent projects. 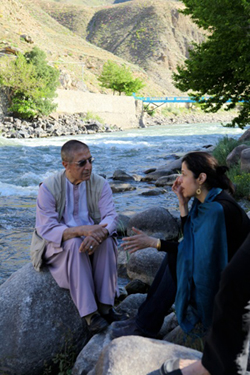 After completion of Motherland Afghanistan, Dr. Mojadidi returned to Kabul to begin a three-year stint training doctors at the Cure International Hospital. There, he founded the country’s first and only Fistula Care Center where hundreds of Afghan women suffering from fistulas throughout the country receive top surgical repair and a chance at a new life. Returning to the US, Dr. Mojadidi joined the Navajo Indian Hospital’s Maternity Ward in Tuba City, Arizona, where he continues his work with the Navajo community training doctors at the hospital. Yearly, Dr. Mojadidi returns to Afghanistan for a month to volunteer at several hospitals in Kabul.

Despite the ongoing challenges of working in Afghanistan, he still considers the experience rich and worthwhile, though he does feel the country’s future is precarious at best. Based in New York and Kabul, Sedika continues working as a documentary producer and camerawoman in Afghanistan. Last year, she directed a documentary on young Afghans training to become journalists in the country. Currently, Sedika is documenting the year before the American troops withdrew from Afghanistan through various conversations with Afghans, asking them what they think of the past 11 years, the strides and mistakes made, and their fears and hopes for the future.