Women & Girls Lead announces the launch of Through Her Lens, an online series of dramatic shorts premiering on June 12, 2013.

Women are conspicuously absent from the top ranks of film. In 2012, women made up a measly 9 percent of directors working on the top 250 domestic-grossing films in the U.S. But there are a few bright spots: Women were more likely to work for documentaries, dramas, and animated films than action, horror, and sci-fi in 2012. At high-profile film festivals, they more commonly were directors of documentaries than narrative features. They are also more likely to be top brass on feature-length films in top U.S. film festivals than the cash-raking, top 250 grossing films.

ITVS’s response to this gender gap? Women and Girls Lead’s series of dramatic shorts, Through Her Lens premiering exclusively online on June 12, 2013.  Directed by women, featuring stories about women, the series travels from the streets of Spanish Town, Jamaica, to an apartment in Amman, Jordan, to a Chinese immigrant enclave in New York City.

The Through Her Lens directors have encountered gender-based biases throughout their careers. “Maybe it’s a little more difficult for people to take a chance on you as a woman,” said Tanya Elaine Hamilton, director of Good Country People. “And that in part is about perspective, and wanting to tell stories about women, and feeling that that isn’t as valued as other subjects.”

To remind herself of the value of women’s stories, Hamilton has connected with mentors close and far. For example Michelle Satter, founding director of the Sundance Institute’s Feature Film Program, keeps tabs on Hamilton: “Even when I wasn’t producing stuff, she had great faith that I would. She was always there to help.” In addition to fighting to tell women’s stories, Paola Mendoza carves out a space for U.S. immigrant stories.

The first feature-length narrative Mendoza wrote and directed, Entre Nos, follows a Colombian woman who immigrates with her two children to Queens, New York, in search of her husband. As part of Through Her Lens, Mendoza wrote and directed Half of Her, a short about a Chinese immigrant couple in New York, and the new mother’s struggle to save her baby daughter against her husband’s wishes. “I am an immigrant, so I have a particular affinity towards stories about immigrants,” Mendoza wrote in an email. “I didn't have a choice to come to the U.S. I came with my mom at a young age, but I saw my mother struggle everyday, so I know that experience well. I am always amazed at the bravery immigrants have. It takes a lot of courage to leave behind your home and family, and walk into a country with nothing and no one. This courage is universal, it doesn't know ethnic boundaries or cultural divides and that is really what I am interested in exploring, regardless of where the people are from. I want to learn from their bravery. I want to be inspired by their resolve.”

Her advice to aspiring female filmmakers: “Women have to do a lot more to prove themselves to the powers that be than their male counterparts. So what are we supposed to do? Work harder! Work together! Get more women in those decision-making seats and SUPPORT one another!” “Tell stories that keep you up at night. Tell stories that make you a better person. Tell stories truthfully and with integrity, and when you want to give up, you just gotta dig a bit deeper into that well!”

WATCH AND CHAT LIVE WITH FEMALE FILMMAKERS of THROUGH HER LENS ! 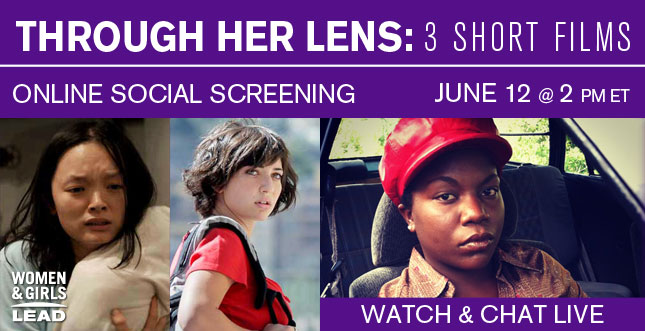 Join Women & Girls Lead for an online launch event for Through Her Lens on Wednesday, June 12 at 2pm ET. Watch and chat live with filmmakers, indie fans  and media experts from Fem Inc. and Women in Film and Video at ovee.itvs.org/screenings/zctrg.