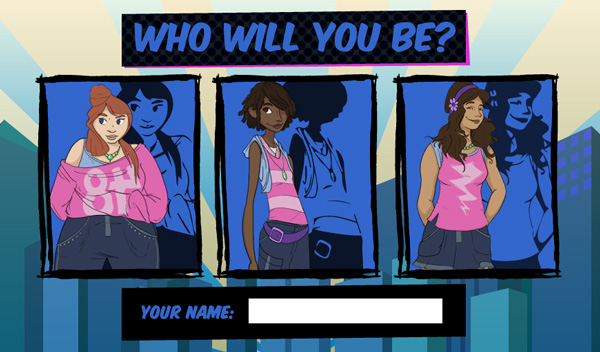 We were first encouraged to create a game at the BAVC Producers' New Media Institute. Our research found that half of girls ages 8 to 12 play games online. The most popular “girl games” center on themes like cooking, shopping, makeup, and dating, and the default protagonist of most other games is a white male. This lack of representation discourages girls and women from participating in the gaming community – as either consumers or creators. While making the film, we became aware of how few women occupy leadership positions – fewer than 15 percent! – in politics, business, government and the media.

Despite the gains of the women’s movement, we still live in a world where girls are rarely protagonists, let alone shown as strong, smart, or bold. Girls are constantly bombarded by messages and media representations that put them into narrow, stereotyped boxes and limit their choices. Too few girls have risen to be leaders in business, politics, government, or media. Our hope is that WONDER CITY will undermine these problematic stereotypes and gender limitations by immersing players in a world that represents a more realistic diversity in race, gender, and body image. By empowering tweens to adopt their own superhero identity, they become agents of their own values.

With the help of the non-profit, Games for Change, an organization that facilitates the creation and distribution of social-impact games, we were able to connect with game designer Naomi Clark, who truly understood our vision. We brought on board Tamarind King, the up-and-coming illustrator who did our brilliant title sequence and ending credit animations for the film. We were ecstatic when we found out that ITVS wanted to fund the pilot episode of the game. We then hired the rest of our team!

As filmmakers, it has been an incredible experience to see this game come together and to lean more about development process. We connected with an amazing writer, Phoebe Harris Elefante, who has a great ear for teen characters, and a lead illustrator, Melody Lu, who has brought our vision to life. And of course, we'd be nowhere without a brilliant programmer, Justin Fargione, to make all our gaming dreams come true. We are truly excited to bring to you WONDER CITY. Wonder City launches May 1st! Discover the super inside you!