Small enough to jail. Proud enough to fight back. 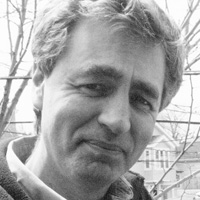 Steve James is best known as the award-winning director, producer, and co-editor of Kartemquin's Hoop Dreams, which won every major critics award as well as a Peabody and Robert F. Kennedy Journalism Award in 1995. The film earned Steve the Directors Guild of America Award, The MTV Movie Awards "Best New Filmmaker," and an Oscar nomination for editing. Hoop Dreams… Show more was selected for the Library of Congress's National Film Registry, signifying the film's enduring importance to American film history. Steve's other award-winning films produced with Kartemquin include Stevie, winner of major festival awards at Sundance, Amsterdam, Yamagata, and Philadelphia; the PBS series, The New Americans, which won the prestigious 2004 International Documentary Association Award for Best Limited Series; At the Death House Door, which won numerous festivals and was Steve's fourth film to be officially short-listed for the Academy Award; and No Crossover: The Trial of Allen Iverson for ESPN Films' International Documentary Association-winning series 30 for 30.The Interrupters is Steve's sixth film in partnership with Kartemquin and his fifth film to play at the Sundance Film Festival. The film will be broadcast on PBS's Frontline in late 2011. Steve's other work includes The War Tapes, which he produced and edited, and which won the 2006 Tribeca Film Festival Grand Prize. Show less

Other ITVS Films
The Interrupters
The New Americans

Only one bank faced criminal indictments related to the 2008 financial meltdown: Abacus Federal Savings Bank, a small community bank in Chinatown, New York City. With exclusive access to the Sung family, Abacus: Small Enough to Jaill is both a character-driven film and a deep examination of the unequal application of justice in the wake of the financial crisis. Thomas Sung founded the bank in 1985 to help his fellow Chinese immigrants gain a financial foothold in America on their way to citizenship. His daughters Jill and Vera eventually followed in his footsteps, becoming the Bank President and Loan Director, respectively. Against the unfolding trial, the film delves deeply into the questions of who receives justice in America and at what cost. It also asks the fundamental questions about what the purpose of a bank should be in a community, and especially an immigrant community.