The odd and unexpected places where collectibles from America’s troubled racial history are made, bought, sold, and reclaimed. 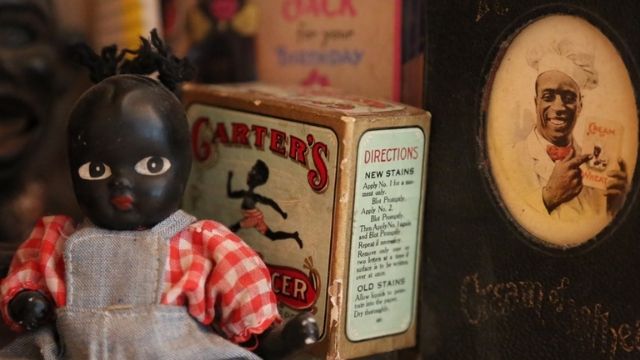 Chico Colvard teaches Race, Law and Media related courses at MassArt. He was the Founding Curator of the UMB Film Series. Chico is also the founding member of C-LineFilms, which produces short and long form documentaries as well as online commercial content. His feature doc, Family Affair, premiered in competition at Sundance and was the first film… Show more acquired by Oprah Winfrey for her cable channel, OWN. The film streamed on Netflix, iTunes and other online outlets. The film screened at festivals and aired on TV stations around the world. He is a two-time Sundance Fellow, WGBH Filmmaker-in-Residence, Firelight Media Fellow, and Flaherty Fellow. Chico is a frequent guest speaker, moderator, festival panelist and juror. His recent film, BLACK MEMORABILIA examines the manufacturing, consumption. and reclamation of these objects. The film premiered at MoMA and screens at festivals and museums nationally and internationally. Show less

Traveling from industrial China to the American South to the Bedford-Stuyvesant neighborhood of Brooklyn, Chico Colvard’s documentary takes an intent, close-up look at a category of early-20th-century collectibles sometimes referred to as “black memorabilia” — signs, household goods, figurines, and other unsettling tchotchkes that feature demeaning representations of African Americans. You could call them reminders of America’s troubled racial history — except that they continue to be manufactured. Viewers are transported to a factory in China’s Hebei Province to observe the mass reproduction of a coin bank molded into the caricatured likeness of an African American man. Later, the original artifact surfaces at the Raleigh, North Carolina state fairgrounds, among the wares of Joy, an antique dealer specializing in Civil War and KKK collectibles. And finally, in an act of reclamation, a Brooklyn artist named Alexandria reveals a “secret body of work”: a box of photographs in which she adopts the persona of a piece of black memorabilia, not in an act of minstrelsy, but to examine the power such images retain.