After a heated primary election for the presidency of the Navajo Nation, identity and LGBTQ rights become central to the tribe's future. 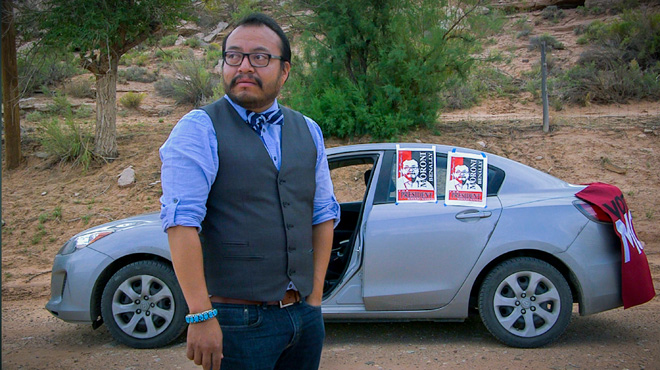 Saila Huusko is a documentary filmmaker and journalist. Her work has appeared online at Al Jazeera, GlobalPost, The Guardian, and The Village Voice– among others. For three years she was the in-house multimedia producer for Crisis Management Initiative, an NGO founded by Nobel Peace Prize Laureate Martti Ahtisaari. She has worked around the world,… Show more including in South Sudan and Afghanistan. Saila graduated with honors from the Columbia Journalism School and earned her BA from Middlebury College. She also holds a masters in conflict resolution from the University of Queensland.Moroni For President is her first feature film. Show less

Jasper Rischen graduated with high honors from Columbia University’s Graduate School of Journalism, winning a Pulitzer grant awarded to top students, as well as the Henry N. Taylor Award for best foreign student and a DuPont/Judy F. Crichton Award for best thesis film. He was the recipient of a Maria Moors Cabot Prize Scholarship and was named the Paul… Show more Steiger Annual Fund Scholar. Originally from The Netherlands, he worked as the U.S. producer for leading Dutch TV news shows prior to joining Columbia. For them, he produced a wide range of stories from veterans struggling with heroin abuse to the disappearance of the middle class. Moroni For President is his first feature film. Show less

Sara Goldblatt graduated cum laude from Yale University in 2006, with a degree in Political Science. She also holds a Masters Degree in Journalism from NYU, with a concentration in documentary filmmaking. Her first independent film, Amerka!, traces the history of the Lebanese diaspora in West Africa and its current displacement by the arrival of large… Show more Chinese populations in the area. Sara produced and wrote The Iranian Americans, which aired primetime on PBS in December 2012. In 2014, she worked with New York-based artist Sarah Morris on a commissioned film for the Guggenheim Museum in Abu Dhabi. She also produced and wrote Dr. Feelgood, a feature-length documentary on the overprescription of painkillers in the United States. Sara speaks Italian, French, Spanish, and German and is a recent convert to Los Angeles after having lived in Rome, Seoul, and New York. Show less

The Navajo Nation is the largest Native American reservation in the United States. Every four years, the Navajo tribe elects its president, whom many consider the most powerful Native American in the country. In the midst of a frenzied election to determine the next President of the tribe, Moroni for President takes the audience to every corner of this vast area in the iconic American Southwest. The film centers on Moroni Benally, an underdog candidate with radical ideas, whose homespun campaign originated out of anger about the lack of progress in the reservation where he grew up. The witty academic embarks on a grueling, lonely campaign, discovering soon enough that theory does not necessarily prepare you for the daily dirt of politics.

As the election unfolds, the film delves into Moroni's layered identity as a Mormon and gay Navajo man and, along the way, expands to include other LGBTQ characters working on some of the other campaigns. This includes Zachariah George, who is an eccentric assistant to the incumbent president Ben Shelly, with a love for beauty pageants, traditional singing and the Navajo language; and Alray Nelson, an LGBT+ rights advocate and campaign manager of one of the frontrunners. Through its characters, Moroni for President examines the world of LGBTQ rights and the meaning of identity in the Navajo Nation, while shining a light on the pressing social issues facing Native Americans in today's United States.